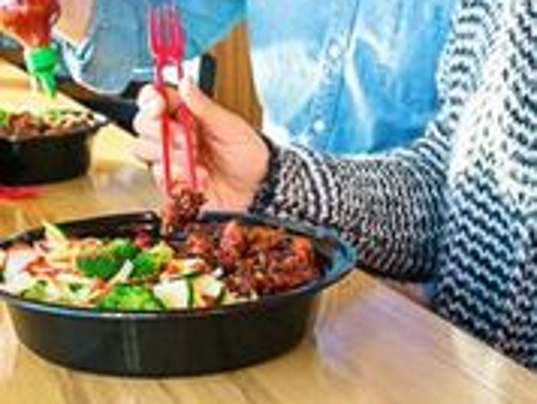 Retired firefighter Frank Giuliano is fanning the flames under his woks as he prepares to open Teriyaki Madness in Cape Coral on Sunday.

Opening Sunday, a special grand opening on Monday and a charity day on Wednesday, he and his 20-member staff are training for the fast-casual, fresh Asian-style.

It’s the fifth Florida restaurant for the Colorado-based chain that started in Las Vegas 14 years ago and has spread to 15 states with more than 40 stores and agreements for more than 150 franchises. The other Florida franchises include: Daytona Beach, Orlando, Kissimmee and Boca Raton.

“We don’t have anything in the area like this,” Giuliano said. “It’s something new and different.”

The chain features all-natural beef, chicken and tofu bowls with steamed or stir-fried vegetables and choice of white, brown or fried rice or noodles and sauces.

The sauces include teriyaki, spicy, orange, katsu, gyozo, sweet and sour, stir-fry and thick teriyaki. All are made on site.

“We have all the ingredients in house,” Giuliano said. “They are all-natural, all fresh and we have a specific way to make them. They are old family recipes.  We do it exactly like they say, and they’re delicious.”

His favorite is a spicy chicken bowl, with chicken thighs and the hottest sauce over yakisoba noodles.

The restaurant also has appetizers including egg rolls, potstickers, edamame and crab rangoon.

Giuliano became acquainted with Guardian Angels through his niece and nephew, who have Down syndrome.

“They are wonderful over there,” he said, anticipating selling up to 300 bowls Wednesday and hoping for more.

The former deputy battalion chief for the Bonita Springs Fire District is a 28-year Cape Coral resident. He retired after 26 years with the department.

“I didn’t want to do nothing in my retirement,” he said. In his mid-20s, he had owned a hot dog joint in Chicago, and had anticipated a return to the food industry.

“When I was a kid and did it on my own, I had no idea what I was doing,” he said. “I did everything the hard way. This time, the franchise was good fit for me.”

The 18-seat restaurant is across Santa Barbara Boulevard from Cape Coral High School. There is also seating for six on the patio, Guiliano said.

It has a drive-through pick up window, but since the food is made upon order and takes approximately 7 minutes, people should phone in their orders, he said.

“We are looking forward to a lot of success here and making a lot of people in Cape Coral happy,” he said.

What: Teriyaki Madness offers fresh-made appetizers such as edamame, potstickers, egg rolls rangoons; Japanese Yakisoba noodles, stir-fried in handmade sauce with veggies and  choice of chicken, beef or tofu; and  bowls come with chicken, beef or tofu with white rice, brown rice or noodles and steamed or stir-fried veggies. Plates come with choice of vegetables, macaroni salad or green salad.